The greatest cinematic-like TV achievement is “The Walking Dead”. The show that has all of America on it’s toes and viewers biting their fingernails.  Who knew the suspense and intensity of being hunted by zombies would be so mind-boggling to watch and have its fans preparing for a catastrophic doomsday. The best part about the show is that it was filmed in mega city Atlanta! “The Walking Dead” isn’t the only cool thing that was filmed in the city. Take a look at all the television and motion pictures that were filmed in the Atlanta region.

You wouldn’t guess the heartthrobs of “The Vampire Diaries” Ian Somerhalder and Paul Wesley work right here in Atlanta! For over 6 seasons the actors have been filming the TV show that makes all the girls flutter and shiver. Fans can take a tour through the Mystic Falls set when visiting the show’s main filming location in Covington, Georgia.

Here’s another zombie flick that will keep you on the edge of your seat while laughing your ass off! This comedy-horror starring Emma Stone, Jesse Eisenberg, Abigail Breslin, and Woody Harrelson used a lot of Atlanta scenery to film most of the landmarks. The amusement park that was used in this movie resides in Atlanta, Ga and the house used for Bill Murray’s cameo is in the city as well. 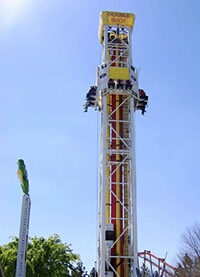 Image by The Worldwide Guide to Movie Locations via Website (http://www.movie-locations.com/movies/z/Zombieland.html#.V3_4edbD9Ag)

The Blind Side (Movie)

The Blind Side starring Sandra Bullock, and Quinton Aaron tells the true story of all-star NFL player Michael Oher. Regardless of the true events taking place in Michael’s hometown Memphis, Tennessee, The Blind Side was shot in Atlanta, Ga. The movie’s other filming locations were in Agnes Scott College in Decatur and Atlanta International School in Buckhead, GA.

This widely known film adapted from the novel series, “The Hunger Games” has gotten the whole world’s attention with its post-apocalyptic action-thriller and its battle royale energy. Some of the landmarks that were filmed in the movie were the Georgia World Congress Center and the Goat Farm Arts Center. The third and fourth adaption from the novel series were also filmed in Atlanta, Ga .

Image by National trust for Historic Preservation via Website (https://savingplaces.org/stories/atlantas-swan-house-historic-home-hunger-games-set#.V3_6J9bD9Ah)

The best is saved for last. The highly acclaimed, critics choice awarded TV show filmed in Atlanta, goes to none other than zombie sensation “The Walking Dead.” Starring Andrew Lincoln, Chandler Riggs, Danai Gurira, and Norman Reedus. The major filming locations of the show is the hospital, Harrison Memorial, that is seen in the first episode and the main highway of Atlanta.

This site uses Akismet to reduce spam. Learn how your comment data is processed.